Merrick Thomson, an Ontario  native who attended the Albany Academy proved himself to be one of the greatest finishers in the history of college lacrosse while at UAlbany from 2004-2007.  Thomson was America East Rookie of the Year in 2004 , a Third Team All American in 2007, and 2007 Most Outstanding Player in the America East Championship.  Thomson’s collegiate career ended with him as UAlbany’s career leader in points (now third all-time) and goals (now second all-time).  Thomson went on to play professional lacrosse in the National Lacrosse League (NLL) and Major League Lacrosse (MLL).   He led the Toronto Nationals to the 2009 MLL championship, earning the playoff MVP award.  Following his pro lacrosse career, Thomson coached at the Hill Academy, where he also served as assistant dean of students and an academic advisor.  Thomson has now returned to UAlbany where he is serving as an Assistant Coach, and as the Great Danes’ Offensive Coordinator.

We recently had the chance to talk with Merrick – our Q&A with him follows.

Your professional lacrosse career ended due to post-concussion symptoms that you were suffering.  Have the changes to high school and NCAA rules which de-emphasized big hits helped to protect players?

MT: There are always going to be big hits, but the biggest difference now is awareness about concussions.  When I was going through it, there was little talk about concussions.  Now there are proper protocols in place to follow before a player can return to play after a concussion.

You are back at UAlbany in the role of Assistant Coach and the Offensive Coordinator.  Has anything changed with the program since your graduation in 2007?

MT: It’s night and day from when I graduated including the facilities, the overall player, and the depth on the team.  Eight guys who I graduated with in 2007-2008 played professional lacrosse, but the overall player at Albany is on another level now.  It’s nice to see that we are competing with Syracuse and Cornell to get the top players in the state.

What can UAlbany offer a player that an ACC or Big 10 program can’t?
MT: Coach Scott Marr is the difference.  He is a purist who believes in a fun, fast game.  He wants our players to enjoy their experience at Albany, and doesn’t micromanage them the way some programs might.  After playing for Coach Marr, our guys still want to be a part of lacrosse.  Look at our coaching tree – there are a bunch of guys coaching at the college and high school levels.

The other thing we can offer is value.  New York is a lacrosse hot bed.  As a fully funded program at a State school, a partial scholarship that we offer to a New York player covers more of his educational expenses than the same scholarship offer from a private school.

As a former UAlbany player, and now the team’s Offensive Coordinator what do you think of the Danes’ style of offense?

MT:Our offense starts with defense and transition.  Our mentality is to run and score with quick strikes.  When we’re playing 6 v 6, teams will see different sets from us this year than in the past few years.  We want a committee based offense with five, six, or seven guys scoring twenty plus goals each.

You had the opportunity to coach Head Coach Scott Marr’s son Kyle last year at the Hill Academy.  Was coaching the son of your college coach a different experience than coaching the other Hill players?

MT: It was unbelievable.  Kyle grew up watching me play, and I watched him grow up playing.  Kyle has developed into a fantastic player, and I’m sure he’s going to have a great year at Hopkins.  We still text each other and stay in touch.  Coach Marr trusted Brodie Merrill (Hill Academy Lacrosse Director) and me with Kyle, and he saw how much Kyle grew in his time at the Hill Academy… and not just in lacrosse.

You were recently also named as Assistant Coach of the Canadian National U19 team.  What do you expect from this opportunity to coach Team Canada?

MT:  Coaching at the international level will definitely help me as a coach.  Team Canada will have a great young coaching staff including Head Coach Taylor Wray (Head Coach at St. Joseph’s), and Matt Brown (Associate Head Coach at the University of Denver).  I’m looking forward to a great experience, and networking opportunity with all of the coaches.

Do you expect any opportunities to recruit players for UAlbany at the U19 Worlds?

MT: With early recruiting most Canadian, US, and Iroquois players at this age level are already committed.  There isn’t much opportunity to recruit players at an event like this, but it’s still good exposure for our program.

Are there still differences between the Canadian and US styles of lacrosse, or are they beginning to blend together?

MT: The Canadian and US styles are still completely different.  Everyone is trying to jump on box lacrosse, but the Canadian kids have been playing in the box their whole lives in meaningful, physical games.  There are some differences in skills, but it is more a difference in mentality.  You can see it in the success that players who grew up playing box lacrosse in Canada and on the reservations are having.

Tell us about the Box-Out Lacrosse camp that you will be hosting in Albany?

MT: I’m working with United Lacrosse on this camp.  We’ll be setting up a bunch of portable arena boards outside on the grass to make the playing areas.  We’ll be teaching true box lacrosse skills and scenarios.  In addition to the skills, it’s again about developing the box lacrosse mentality that will help players wherever they are playing.

Blaze Riorden scored the most famous goal of 2015, and played forward for the US World Indoor Lacrosse Championship bronze medal team.  Any pressure from him to get some run at attack in 2016?

MT: Not really any pressure.  We’ll play things by ear.  Blaze can shoot harder than most players in college lacrosse, but we can’t risk him getting slashed or anything.  He’s the best goalie in the country.

Any closing thoughts as we approach the 2016 season?

MT: A lot of people have counted Albany out after the graduation of Lyle Thompson, but we’re in a really good spot.  We have a group of seniors who know how to win, depth, a talented freshmen group, and a great goalie.

Thank you for taking the time to speak with us Merrick, and good luck to the Great Danes in the upcoming season.

Click the picture below for additional information on Merrick Thomson’s Box-Out Camp. 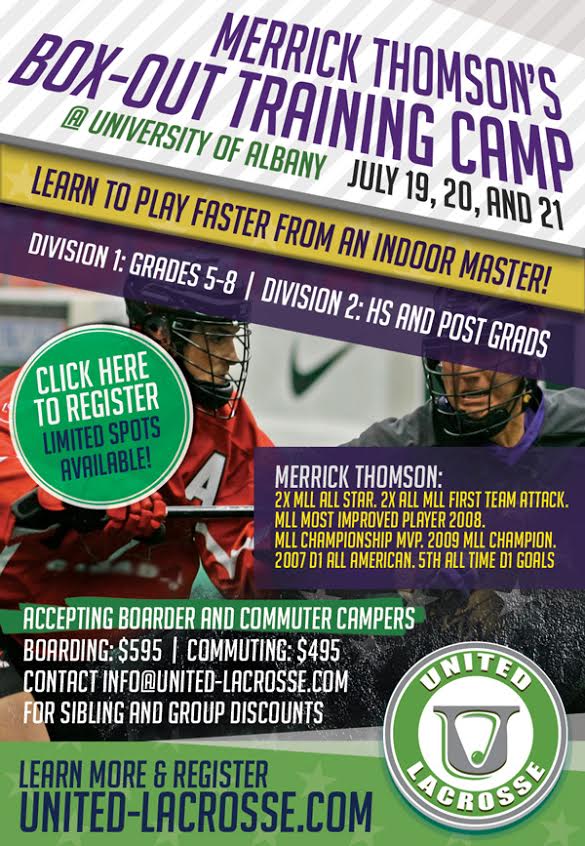 Gary Govel
Gary has been involved in lacrosse in the Capital District for over 35 years as a player, youth coach, program administrator, parent, and fan. Gary launched www.capitaldistrictlax.com in November 2015 to report on lacrosse news and information of interest to the region, and to share his passion for the game. In addition to operating this site and associated social media, Gary is also a contributor to Inside Lacrosse.
http://www.capitaldistrictlax.com